You don't have any saved vehicles!

Look for this link on your favorites:

Once you've saved some vehicles, you can view them here at any time.

Boy meets girl. Boy likes girl. The girl is ready to go home. Two years later, they are married. This is the fairy tale that led to the beginning of Barnes Crossing Auto Group.

Two college students, Josh Kilpatrick and Jessie Marshall, enjoyed a relaxing cruise through the Caribbean. On the last night, Jessie met Josh for the first time by accident in the lobby, wanting his advice about a purchase she was trying to make for another friend. Five minutes turned into two hours, but after two hours, Jessie was ready to leave. She said a quick goodbye, and was gone, leaving no phone number, address, or even a last name.

Josh knew that he had met the girl he was going to marry. Jessie was not nearly so certain. After a long courtship, while Josh was serving in the Army as a UH-60M Blackhawk Pilot, the two were married. However, let’s back up to January of 2010.

In January 2010, Joe Marshall, Jessie’s father, received an email about a car dealership for sale in Tupelo, Mississippi. Very interested in the proposal, he traveled to Mississippi to meet the seller. Looking around the Hyundai/Mazda dealership, he knew that the Lord had sent him that email. It was perfect; a good location, great franchise, and wonderful people. He traveled back to Louisville on a mission to find the right partner. It was almost midnight on his drive back when he called Jessie. He told her about the dealership; it was a dream come true.

As soon as Jessie got off the phone with her dad, she called her fiancé, Josh. Thrilled to tell him all that her father had just told her, he then relayed the information to his dad, Terry Kilpatrick. Terry was interested in Joe’s business endeavors and stayed informed about what was happening through Josh. Meanwhile, Josh and Jessie’s wedding was getting close.

About a month away from the wedding, Terry and Joe decided to go into business together. Thus, Barnes Crossing Hyundai Mazda was born. So, the two families were connected, and a month later, the two families became one family as everyone celebrated the marriage of Josh and Jessie on July 3, 2010.

Since 2010, Barnes Crossing has been blessed to turn that first store on North Gloster to ten stores across Mississippi and into Tennessee. This growth can be credited to our customers we are honored to serve and the sincere dedication to customer service provided by our employees.

Get Directions
Search
Find Your Vehicle ×

You don't have any saved vehicles!

Look for this link on your favorites:

Once you've saved some vehicles, you can view them here at any time. 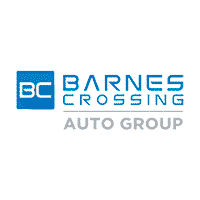